US-Pak relationship has not served either of two: Jaishankar 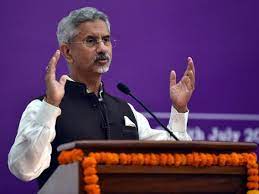 America's relationship with Pakistan has "not served" either of the two countries, External Affairs Minister S Jaishankar said Sunday raising questions on the Biden administration's approval of a USD 450-million sustenance package for F-16 fleet.

"Very honestly, it's a relationship that has neither ended up serving Pakistan well, nor serving the American interests. So, it is really for the United States today to reflect on what are the merits of this relationship and what do they get by it, Jaishankar said in response to a question during an interaction with the Indian-Americans.

Referring to the argument made by the US that F-16 sustenance package is to fight terrorism, he said everybody knows where and against whom F-16 are used. "You're not fooling anybody by saying these things," he said in response to a question.

Early this month, the Biden administration approved a USD 450 million F-16 fighter jet fleet sustainment programme to Pakistan, reversing the decision of the previous Trump administration to suspend military aid to Islamabad for providing safe havens for the Afghan Taliban and the Haqqani network.

In a notification to the US Congress, the State Department made a determination approving a possible foreign military sale for sustainment and related equipment for an estimated cost of USD 450 million, arguing that this will sustain Islamabad's capability to meet current and future counterterrorism threats by maintaining its F-16 fleet.

In a call with US Defense Secretary Lloyd Austin, Defence Minister Rajnath Singh had expressed India's concerns about the F-16 package to Pakistan