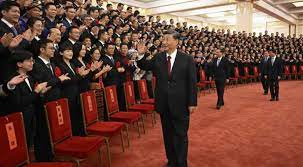 China’s ruling Communist Party on Sunday announced it had chosen the 2,296 delegates who will attend an all-important twice-a-decade national congress on October 16 that is expected to further bolster President Xi Jinping’s sway over the party.

The Party said the delegates were “elected in accordance with the Party Constitution” and “under the guidance of Xi Jinping Thought on Socialism with Chinese Characteristics for a New Era”, referring to the Chinese leader’s official ideology which has already been written into the Party Constitution.

The week-long congress, which is likely to mark the start of an unprecedented third five-year term for Mr. Xi, will pass several amendments to the Party Constitution, some of which will further enshrine Mr. Xi’s status in the party on a par with former leaders Mao Zedong and Deng Xiaoping.

Among considered constitutional amendments is a move to officially mark Mr. Xi’s status as a “core” of the party leadership and to require all Party members to commit to upholding Mr. Xi’s “core” status as well as ideology.

Announcing the congress delegates, the official People’s Daily in an editorial said the “Congress will be a congress of unity… under the strong leadership of the CPC Central Committee with Comrade Xi Jinping at its core”.

“The congress will lay out sound plans on the targets, tasks and major policies for the cause of the Party and the country in the next five years and beyond,” the paper said, adding that the event “will take stock of the Party’s work over the past five years, as well as major achievements and valuable experience of the Party’s Central Committee with Comrade Xi Jinping at its core in uniting and leading the whole Party and Chinese people”.

The delegates, who will approve the amendments to the Constitution and other policies by “voting” — although the approvals are a foregone conclusion at such events — include representatives from different government Ministries and the military, as well as figures involved in science and technology, culture and sport.

Among the military’s delegates to the congress is the PLA commander in Galwan Valley who was involved and injured in the June 2020 clash and was later given honours by the Central Military Commission, which Mr. Xi heads.