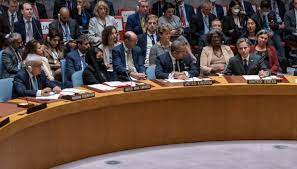 Washington,(PTI) US Secretary of State Antony Blinken has underlined the need to “modernise” the UN Security Council by making it more inclusive and increasing the number of permanent seats in the global body, a “long-standing” goal of India.

India has been at the forefront of efforts at the UN to push for urgent long-pending reform of the Security Council, emphasising that it rightly deserves a place at the UN high table as a permanent member.

“We recognise that to meet the challenges we face, members of the UN must not only uphold the charter but also modernise the institution, including by making the Security Council more inclusive,” Blinken told reporters at a joint news conference with visiting External Affairs Minister S Jaishankar.

“That’s why, in his address to the General Assembly, President (Joe) Biden expressed his support for increasing the number of both permanent and non-permanent representatives of the Security Council, a long-standing goal of India,” he said on Tuesday.

At present, the UNSC comprises five permanent members and 10 non-permanent member countries which are elected for a two-year term by the General Assembly of the United Nations.

The five permanent members are Russia, the UK, China, France and the United States and these countries can veto any substantive resolution. There has been growing demand to increase the number of permanent members to reflect the contemporary global reality.

Jaishankar, who arrived here from New York where he attended the UN General Assembly Sessions, said the reform of the UN is a particularly topical subject.

“We appreciate the positive approach of the US to this issue reflected in the position articulated by President Biden himself. We look forward to working with the US to take this further,” he said.

“I also expressed appreciation at the strong cooperation that we have got from the US on the question of tackling international terrorism. In particular, I refer to the listing of well-known and wanted terrorists by the UN sanction process. In many other formats too, our two countries collaborate to keep the world safer and more secure,” Jaishankar said.

In New York, S Jaishankar on Sunday said that terrorism should not be used as a “political tool” and the idea that something is blocked without assigning a reason challenges common sense.

China, a veto-wielding permanent member of the Security Council, has repeatedly put holds on listing proposals by India, the US and other allies to blacklist Pakistan-based terrorists under the 1267 Al Qaeda Sanctions regime of the Council.

Last week, China put a hold on a proposal moved at the United Nations by the US and co-supported by India to designate Lashkar-e-Taiba terrorist Sajid Mir, wanted for his involvement in the 26/11 Mumbai terrorist attacks, as a global terrorist.

Last month, China put a hold on a proposal by the US and India at the United Nations to blacklist Abdul Rauf Azhar, the brother of Jaish-e Mohammed (JEM) chief Masood Azhar and a senior leader of the Pakistan-based terror organisation. Abdul Rauf Azhar, born in 1974 in Pakistan, was sanctioned by the US in December 2010.

In June this year, China had put a hold, at the last moment, on a joint proposal by India and the US to list Pakistan-based terrorist Abdul Rehman Makki under the 1267 Al-Qaida Sanctions Committee of the UN Security Council. PTI