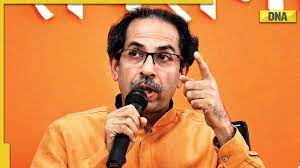 Mumbai,(PTI) Slamming the Bharatiya Janata Party (BJP) over its plan to organise 'Marathi dandiya' in areas dominated by Maharashtrians in Mumbai, the Uddhav Thackeray-led Shiv Sena on Wednesday said its former ally is under an "illusion" if it thinks the community's unity can be undermined with such events.

The BJP, which is a part of the Eknath Shinde-led government, has announced plans to organise ‘Marathi dandiya’ in predominantly Marathi-speaking areas during the ongoing Navratri festival.

At such dance events, mostly Marathi songs (instead of Hindi or Gujarati) will be played for participants. The events are being seen as an attempt by the BJP to woo the Marathi votes -- which have been traditionally with the Shiv Sena -- ahead of the Mumbai civic body polls.

In an editorial in its mouthpiece 'Saamana', the Thackeray-led Shiv Sena said events like Marathi dandiya are aimed at countering the party in its areas of influence in the metropolis.

“By organising Marathi dandiya in Lalbaug, Parel, Sewree, Byculla, Parel and Mazgaon, Kamlabai (the name Shiv Sena has been using for the BJP of late) has been trying to woo the Marathi voters. After Ganeshotsav, the BJP is using Navratri for its political purpose.

“But it is their illusion if they think they can break the unity of the community (with such events),” the editorial maintained.

However, such events will not dent the Shiv Sena's support among the Marathi manoos (Marathi-speaking people), the newspaper said.

“This is nothing but an attempt of the Dillishwar (the term Shiv Sena uses for Delhi) to bring down the saffron flag,” it said.

The BJP has been using events like Ganeshotsav (Ganesh festival) and 'Marathi katta' (a place where ideas are exchanged) to woo the Marathi voters ahead of the crucial Brihanmumbai Municipal Corporation (BMC) polls.

In the 2017 BMC polls, the Shiv Sena won 84 seats, its lowest tally in the 227-member civic body in two decades, while the BJP considerably improved its tally and bagged 82 seats.

Shelar said when in power, the Shiv Sena, which headed the Maha Vikas Aghadi (MVA) government, had shut temples for two-and-a-half years and stopped Ganesh, Navratri and Dahi Handi festivals (during the coronavirus pandemic).

Backing the Shiv Sena, Nationalist Congress Party (NCP) spokesperson Clyde Crasto said on one hand, the BJP is organising Marathi dandiya and on the other the ruling party is quiet over the demand (by Jain community) to ban advertisements for meat and meat products in print and electronic media.

The Bombay High Court on Monday asked three Jain religious charitable trusts and a city resident practising Jainism why they were seeking to encroach on the rights of others by appealing for restrictions or ban on advertisements for meat and meat products in print and electronic media.

A division bench of Chief Justice Dipankar Datta and Justice Madhav Jamdar noted the issue falls within the domain of the legislature and it cannot frame laws and rules imposing bans. PTI