DU is country’s most successful university, but much more can be done: Union minister Hardeep Puri 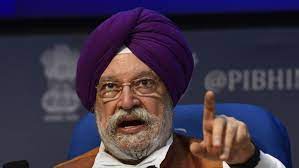 New Delhi,(PTI) Delhi University is the most successful "centre of excellence" in the country but much more can be done, Union minister Hardeep Singh Puri said on Tuesday.

Speaking at the launch of a book celebrating 100 years of the university, the housing and urban affairs minister reminisced his time in DU's Hindu College and noted that a good institution is defined by its student body.

During his address at the event, the Union minister said he is proud and honoured that he could brought together some of its most illustrious alumni to collective reflect on its rich history, vibrant student life, and influence on India's public discourse today.

“This anthology was conceived with the intention of celebrating the 100 years of our alma mater and the role it has played in furthering world-class education. It has successfully captured a spectrum of viewpoints that covers five decades of studying or teaching at the university,” he said. PTI