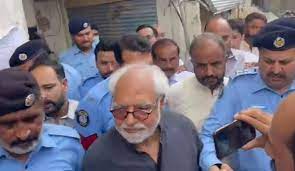 Islamabad,(PTI) A local court in Pakistan on Sunday approved a one-day physical remand of a senior journalist for his alleged involvement in the gruesome murder of his daughter-in-law.

Journalist Ayaz Amir was arrested on Saturday, a day after his son Shah Nawaz brutally killed his 37-year-old wife with a dumbbell apparently over a domestic dispute, according to police.

The murder took place at a farmhouse located in the capital’s Chak Shehzad suburb where the suspect lived along with his mother. The farm house was owned by Nawaz’s mother who is the ex-wife of his father.

Amir was arrested hours after police were directed by the district and sessions court in Islamabad to arrest Nawaz’s parents to investigate the killing of Sara Inam, a Canadian citizen of Pakistani origin.

After killing his wife, the suspect allegedly put Sara’s body in a bathtub, sources said.

Earlier on Saturday, Nawaz was handed over to the police for a two-day physical remand.

At the hearing on Sunday, Amir and his son were produced before judge Zahid Tirmizi.

Amir expressed his disappointment before the court, saying he had been arrested “despite the fact that I provided information to the police”, the Dawn newspaper reported.

“Shahnawaz is a suspect and I have no sympathies for him,” he told the court.

“Shahnawaz is addicted to drugs,” he said, refraining from defending his son in court.

After hearing arguments, the court granted a one-day physical remand of the journalist.

Amir is a well-known journalist who has also served as a member of Parliament. He regularly appeared in a talk show on Dunya TV until he was arrested. He is also known for his anti-government and anti-establishment views and was recently attacked by unknown persons, a known tactic to silence critics. PTI