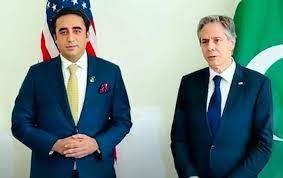 Washington, (PTI) The importance of managing a "responsible relationship" with India and addressing the debt issue with China so that Pakistan can recover more quickly from the impact of the devastating floods were the key focus of the talks between US Secretary of State Antony Blinken and his Pakistani counterpart Bilawal Bhutto Zardari.

During the meeting at the Foggy Bottom headquarters of the State Department on Monday, Blinken also said US and Pakistan will continue to work closely on counterterrorism issues.

“In our discussion today, we talked about the importance of managing a responsible relationship with India, and I also urged our colleagues to engage China on some of the important issues of debt relief and restructure so that Pakistan can more quickly recover from the floods,” Blinken said at an event here to Commemorate the 75th Anniversary of US-Pakistan relations.

Relations between India and Pakistan have been strained over the Kashmir issue and cross-border terrorism emanating from Pakistan.The ties between the two countries nosedived after India abrogated Article 370 of the Constitution, revoking the special status of Jammu and Kashmir and bifurcating the State into two Union Territories on August 5, 2019.

Following India’s decision, Pakistan downgraded diplomatic ties with New Delhi and expelled the Indian envoy. Trade ties between Pakistan and India have largely been frozen since then.

Blinken said they also spoke about the importance of meeting their commitments as democracies, upholding core values like respect for freedom of religion, belief, freedom of expression.

On his part, Bilawal said the Pakistan-US relationship is not only resilient, but also stood the test of time.

Underlining that the two countries will continue to work closely on counterterrorism issues, Blinken said the US and Pakistan have a shared stake in Afghanistan’s future after two decades of war.

"We’ve had our differences; that’s no secret. But we share a common objective: a more stable, a more peaceful, and free future for all of Afghanistan and for those across the broader region.

“We’ll continue to work together toward that end as well as support the basic human rights of the Afghan people, especially women and girls,” he said.

Ahead of his meeting with Bilawal, Blinken told reporters that the US stands in solidarity with Pakistani people who have been suffering due to the devastating flood in recent weeks.

“There is tremendous focus right now on the truly devastating floods that Pakistan has experienced, and we stand in strong solidarity with our friends in Pakistan...and not only stand in solidarity, but we are also doing everything we can to be of assistance in this moment just as Pakistan has been of assistance to us, including at the beginning of COVID,” he said.

Later in a readout, State Department Spokesperson Ned Price said during the meeting between the two leaders, Blinken expressed sorrow over the devastation and loss of life throughout Pakistan caused by catastrophic flooding.

“He reaffirmed the US commitment to the people of Pakistan, noting the nearly USD 56.5 million in flood relief and humanitarian assistance provided this year as well as the additional USD10 million of food security assistance announced today,” Price said.