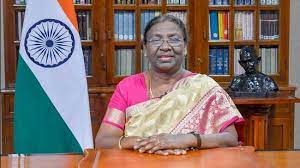 Murmu, who virtually laid the foundation stone of ICMR-National Institute of Virology (NIV) south zone campus in Bengaluru said the NIV-Pune is taking all possible steps to increase research and development in the field of virology.

"I am glad to know that ICMR has provided exemplary support for effective Covid management and is expanding its research infrastructure. National Institute of Virology (NIV), Pune is also taking all possible steps to increase research and development in the field of virology.

Murmu applauded the country's "biggest vaccination drive in human history with vaccines manufactured in the country itself".

She added that in combating the pandemic, India's achievements have been better than those of many developed countries.

"For this feat, we are grateful to our scientists, doctors, nurses, paramedics and the staff associated with vaccination," she said.

Union Minister of State for Health Bharti Pravin Pawar termed it "a great honour that the President of India has unveiled the foundation stone of NIV-South Zone in Bengaluru".

"India, under the leadership of Prime Minister Narendra Modi, has leveraged technology in health sector so that any outbreak can be investigated at an early stage and necessary action is taken to contain it. This new NIV is a step further to strengthen our health defence system," she said.

She stated that under the Prime Minister Ayushman Bharat Health Infrastructure Mission (PM-ABHIM), funds have been approved to set up multi-sector national institutions and platforms including four zonal National Institutes of Virology (NIVs) towards bio-security preparedness and strengthening pandemic research across the country.

The minister highlighted the role of NIV in tackling issues of public health crisis from time to time.  She said that from its inception, ICMR-NIV has led from the front in providing a rapid response to viral infections of public health importance.

“ICMR-NIV investigated potential antiviral drugs, undertook several kit validations, developed new diagnostics with large-scale training which contributed in making India's first indigenous vaccine, Covaxin. These efforts equipped the country against the initial spread of SARS CoV-2. As a result of which, today the whole world looks towards India in research and development in healthcare," she added.

Pawar said the pandemic exposed the frailties of health systems worldwide in recognising and responding to emerging threats to public health.  In this light, the South Zone ICMR-NIV laboratory in Bengaluru will be equipped with a state-of-the-art infrastructure and expertise in handling infectious agents of various risk groups.

"This would be crucial to continuously monitor the regional landscape of infectious diseases in the southern states of India, and thus contribute to bolstering the national surveillance of outbreak-prone infectious disease agents," she said. PTI