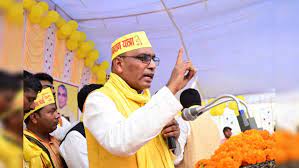 Mahendra Rajbhar announced the formation of 'Suheldev Swabhiman Party' outside the Collectorate office amid sloganeering against SBSP president Om Prakash Rajbhar by Mahendra’s supporters after they were allegedly denied permission to organize a 'mahapanchayat' in a plaza located at Ghazipur trisection.

The supporters of Mahendra Rajbhar reached the venue of the mahapanchayat in the morning only to find it locked. They then reached the Collectorate office from where the police removed them and Mahendra Rajbhar announced the formation of the new party on the road itself.

Speaking on the occasion, Mahendra Rajbhar said the Mau administration did not allow him to hold a mahapanchayat, and blamed O P Rajbhar for it.

The district administration had made elaborate security arrangements deploying a large number of police and PAC personnel in view of the SBSP rebels’ programme.

Several other rebel leaders on Tuesday alleged that O P Rajbhar has deviated from the party's core principles and he listens to only his two sons, not the workers.

Chandrashekhar Rajbhar, one of the rebel leaders, accused O P Rajbhar of selling party tickets and said that “now we will strengthen 'Suheldev Swabhiman Party' under the leadership of Mahendra Rajbhar”.

Mahendra Rajbhar, who is founder member of SBSP, had resigned from the party, along with over two dozen members, earlier this month.

“Om Prakash Rajbhar is only engaged in collecting money. We founded the party in 2002 with a mission to work for the poor and Dalits. But now he is using the party for money. It is because of this that over two dozen party leaders, including state general secretary Arjun Chauhan and state vice-president Awadhesh Rajbhar, have resigned along with me," Mahendra Rajbhar had said at the time of quitting the party.

Mahendra Rajbhar had contested the 2017 Uttar Pradesh Assembly polls from Mau as the BJP-SBSP alliance candidate against don-turned-politician Mukhtar Ansari and lost by a margin of 6,000 votes.

O P Rajbhar, who was active with Bahujan Samaj Party founder Kanshi Ram, founded the SBSP in 2002 and fielded his candidates in subsequent elections but he got success for the first time in 2017.

O P Rajbhar contested the 2017 assembly elections in alliance with the BJP and four of its candidates, including Rajbhar, had won, and he was made a minister in the Yogi Adityanath-led government. But within two years, he left the ministerial post after differences with the BJP.

He is considered an effective leader of the Rajbhar community, having influence mainly in the districts of Varanasi, Devipatan, Azamgarh, Gorakhpur, and Ayodhya.

In the 2022 assembly elections, O P Rajbhar contested in alliance with the Samajwadi Party and won six seats. But during the presidential election held in July this year, he again warmed up with the BJP after adopting a path different from the SP.