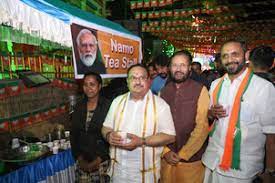 New Delhi, (PTI) The CPI(M) hit out at the BJP on Tuesday, alleging that the remarks of its president, J P Nadda, that Kerala has become a “hotspot of terrorism” were an effort to vitiate the atmosphere of communal harmony in the southern state.

In a statement, the ruling party in Kerala said these false accusations cannot cover up the fact that political violence in the state is “being perpetuated by killings and retaliatory killings indulged in by the RSS and the Popular Front of India (PFI)”.

It said this year itself, there have been four casualties of such killings and retaliatory killings by the workers of these two organisations in Alappuzha and Palakkad districts.

“This is a deliberate effort to vitiate communal peace in the state and create communal polarisation. It would be better for the BJP president to advise the RSS not to engage in such provocative activities. The LDF government has been taking firm action against the violent activities of all extremist organisations.

“The people of Kerala are known for their exemplary commitment to communal amity and peace and they will not tolerate any extremist violence,” the Communist Party of India (Marxist) said.

Nadda claimed on Monday that Kerala is now a “hotspot” of terrorism and fringe elements, and life is not safe in the state.

The Bharatiya Janata Party (BJP) president also attacked Kerala Chief Minister Pinarayi Vijayan, saying his family is getting involved in government matters and the Left party has fallen prey to a family or “dynastic” rule as the “involvement of the daughter and the son-in-law in the government is also seen”. PTI