PFI ban a message to 'anti-national groups' that they will not survive in India: K'taka CM 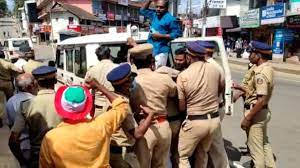 Bengaluru, (PTI) Karnataka Chief Minister Basavaraj Bommai on Wednesday welcomed the Union government’s decision to ban the Popular Front of India (PFI) for its alleged terror activities, and said the move sends a message to all “anti-national groups” that they will not survive in this country.

He said all that is necessary would be done to stop PFI’s activities in the state.

“For a long time, it has been a demand by the people of this country, by all political parties including the opposition CPI, CPI(M) and the Congress. PFI is the avatar (incarnation) of SIMI (banned Students’ Islamic Movement of India), and KFD (Karnataka Forum for Dignity). They were involved in anti-national activities and violence,” Bommai said.

Speaking to reporters here, he said they had their command outside the country and some of their important office-bearers had even gone across the border for the training.

The PFI was involved in all sorts of anti-social activities and time had come to ban this organisation, Bommai added.

“With a lot of background work, information, and cases, the Government of India under the leadership of Prime Minister Narendra Modi and Home Minister Amit Shah has taken the right decision. This is the message for all anti-national groups that they will not survive in this country. I also urge people not to associate with such organisations,” he added.

To a question that PFI was strong in coastal Karnataka and the task before the state government to remove them, the Chief Minister said, “Whatever necessary, will be done.” In a notification issued late Tuesday night, the Union Home Ministry banned the PFI saying the central government is of the opinion that the Islamist outfit and its affiliates have been involved in subversive activities, thereby disturbing public order and undermining constitutional set up of the country and encouraging and enforcing a terror-based regressive regime.

It continues “propagating anti-national sentiments and radicalising a particular section of society” with the intention to create disaffection against the country, it said.

Welcoming the Centre’s decision to ban PFI, Home Minister Araga Jnanendra said it is a right move for the country’s unity and integrity, and to maintain peace and order.

“Recently, the NIA and police of several states had raided several of its activists and office-bearers and had gathered evidences. Such fanatic organisations were instigating a section of youth against the country,” he said.

In an eight-hour long operation on Tuesday, the Karnataka police detained over 80 people, mostly office-bearers and members of the PFI and its political offshoot Social Democratic Party of India (SDPI) from across the state, on the basis of intelligence inputs that they were trying to foment trouble in the society.

Additional Director General of Police (Law & Order) Alok Kumar had on Tuesday noted that raids were conducted by the National Investigation Agency (NIA) as well as the state police last week. The NIA had at the time secured seven people from Karnataka and the state police 13.

BJP national general secretary C T Ravi alleged that the PFI was nurtured by the Congress.

“In a huge step against home grown Terrorism, the Union Home Ministry has banned the Popular Front of India (PFI) and its affiliates for 5 years. Congratulations to Union Home Minister Shri @AmitShah for taking this decisive action against the #PFI that was nurtured by CONgress,” he tweeted. PTI