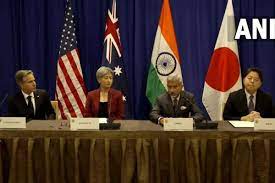 New York, (PTI) The Quad nations of India, Japan, Australia and the US called on states to take reasonable steps to address ransomware operations emanating from within their territory and highlighted that practical cooperation among Indo-Pacific partners would result in denying safe haven to ransomware actors in the region.

Ahead of their meeting, the ministers signed the guidelines to operationalise the Quad Humanitarian Assistance and Disaster Relief Partnership for the Indo-Pacific announced by Quad leaders in May 2022.

Quad also announced a statement on ransomware, calling on states to take reasonable steps to address ransomware operations emanating from their territory.

According to the Quad Foreign Ministers’ statement on Ransomware, they voiced their commitment to an open, secure, stable, accessible, and peaceful cyberspace and support regional initiatives to enhance the capacity of countries to implement the UN Framework for Responsible State Behavior in Cyberspace.

“We strongly believe that focused initiatives for enhancing the cyber capabilities of Indo-Pacific countries would ensure the security and resilience of regional cyber infrastructure,” it said.

Quad also welcomed the negotiations of a possible new UN cybercrime convention as a long-term means to address cybercrime more broadly which will have utility in countering ransomware.

“We underscore the need for a new treaty to be drafted in a technologically neutral and flexible manner, which does not describe specific technologies or criminal methodologies,” it said.

Recalling the last Quad Foreign Ministers’ Meeting in February this year, the ministers voiced their commitment to addressing the global threat of ransomware, which has been an obstacle to Indo-Pacific economic development and security.

“The transnational nature of ransomware can adversely affect our national security, finance sector and business enterprise, critical infrastructure, and the protection of personal data. We appreciate the progress made by the 36 countries supporting the U.S.-led Counter Ransomware Initiative (CRI) and the regular, practical-oriented consultations against cybercrime in the Indo-Pacific region,” it said.

The ministers called on states to take reasonable steps to address ransomware operations emanating from within their territory.

“We exercise responsibility to assist each other in the face of malicious cyber activity, including from ransomware, against critical infrastructure,” they said, adding that they also signal their collective will to fight ransomware threats to the cyber infrastructure that enables Indo-Pacific economic development and security.

“We commit to further cooperate on capacity-building programs and initiatives that are aimed at enhancing regional cybersecurity and improve resilience against ransomware attacks in the Indo-Pacific. The Ministers highlight that practical cooperation in countering ransomware among Indo-Pacific partners would result in denying safe haven to ransomware actors in the region.

“We focus on results-oriented efforts to assist partners across the Indo-Pacific to strengthen their resilience, trust, and confidence in cyberspace, and effective incident-response capabilities,” it said.

They underscored the importance of the multistakeholder approach to building counter-ransomware capacity building, including promoting the role of existing mechanisms such as the Global Forum on Cyber Expertise (GFCE).

They recognised the multistakeholder approach to internet governance will uphold our shared values in the design and use of technologies and cyberspace across our region.

The guidelines on Humanitarian Assistance and Disaster Relief (HADR) have been designed to respond to the vulnerabilities of the Indo-Pacific region and will serve as a dedicated framework for Quad partners to coordinate their disaster response operations in the region.

The mechanism will augment their capacity and capability, interoperability and operational synergy to undertake HADR operations, a statement issued by the Ministry of External Affairs said.

Under the partnership, Quad partners will promote inclusion by advancing gender equality and women’s and girls’ empowerment, ensuring persons with disabilities are agents and beneficiaries of humanitarian action, and by ensuring indigenous people, minority groups and persons in vulnerable situations are not left behind. The guidelines call for zero tolerance for inaction on tackling Sexual Exploitation, Abuse and Harassment (SEAH).

The statement said that the response operations will be guided by the core principles of humanity, neutrality and impartiality as outlined in the relevant United Nations General Assembly Resolution on the provisions of humanitarian assistance.

Any humanitarian action will be carried out with respect for the sovereignty, territorial integrity and national unity of the affected state.

“The signing of these Guidelines marks a significant moment in Quad cooperation, which traces its origin from the 2004 ad hoc Tsunami Core Group which catalyzed international response efforts in the aftermath of the tsunami that devastated many countries in the region,” it said.

Quad partners will meet twice a year to share lessons and operational updates and will conduct at least one scenario-based tabletop exercise to improve preparedness, coordination and interoperability.

“The partnership will coordinate HADR operations with the UN and other international agencies and donors, regional and local governments, public and private organisations, and non-government organizations where appropriate and in the best interest of humanity,” it said. PTI