Fresh crackdown against PFI: More than 170 held across seven states 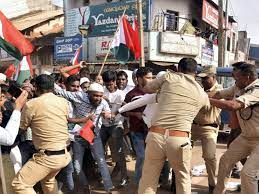 New Delhi, (PTI) More than 170 people allegedly linked with the Popular Front of India (PFI) were detained or arrested in raids across seven states on Tuesday, five days after a similar pan India crackdown against the group often accused of being linked to radical Islam.

On September 22, multi-agency teams spearheaded by the National Investigation Agency (NIA) arrested 106 leaders and activists of the PFI in 15 states for allegedly supporting terror activities in the country. The NIA is investigating 19 cases involving the PFI.

As police teams fanned out across their respective states on Tuesday, seemingly synchronised, the action was swift. While 25 people each were arrested in Assam and Maharashtra, 57 were detained in Uttar Pradesh, officials said. The count of those detained in Delhi was 30, Madhya Pradesh was at 21 followed by 10 in Gujarat and six in Pune in Maharashtra. Besides, several people were also arrested in Karnataka.

In Uttar Pradesh, the raids across 26 districts were jointly carried out by the Anti Terrorist Squad, Special Task Force and the local police simultaneously. Documents and evidence were collected, Additional Director General (law and order) Prashant Kumar said.

Further action will be taken based on the evidence collected, Kumar said while adding that 57 people were taken into custody.

There was no immediate reaction from the PFI, which was formed in 2006 and claims to strive for a neo-social movement ostensibly for the empowerment of marginalised sections of India. It is, however, often accused by law enforcement agencies of promoting radical Islam. The organisation was formed in Kerala and is headquartered in Delhi.

Following the crackdowns, the PFI stares at a possible countrywide ban.

According to officials in Assam, of the 25 PFI activists arrested in the fresh crackdown, 10 were held in Goalpara. Besides, five were nabbed in Kamrup (Rural) and three in Dhubri, followed by arrests in Barpeta, Baksa, Darrang, Udalguri and Karimganj. Chief Minister Himanta Biswa Sarma had earlier said his government has been urging the Centre to ban the outfit for allegedly creating an eco-system for terror activities. In the national capital, Delhi Police’s Special Cell carried out the searches in multiple locations, including Nizamuddin and Shaheen Bagh.

“We have conducted raids at multiple locations in the national capital, including Shaheen Bagh and Nizamuddin. So far, we have detained 30 people associated with the PFI,” a senior police officer said.

Paramilitary forces were deployed in several places in the city where the raids were conducted.

“We have taken preventive measures and as part of it, we have deployed paramilitary forces in respective areas of the districts to ensure law and order situation and maintain peace and tranquillity in the area,” a senior police official said.

No case has been registered as the investigation is underway, police said. The operation started after 12.30 am continued till early morning, police said.

And in Maharashtra, 25 activists were arrested from six districts, including Aurangabad, Thane and Nanded. Other than this, Pune police detained six people linked to the PFI and its political wing Social Democratic Party of India (SDPI), an official said. The Madhya Pradesh Police detained 21 people from eight districts for their links with the PFI, state Home Minister Narottam Mishra said. These people were detained on the basis of interrogation of the PFI activists arrested last week, Mishra, who is also the Madhya Pradesh government’s spokesperson, said.

The SDPI opened an office in Ahmedabad a few months back. In Karnataka, officials said several PFI leaders were detained in urban and rural areas of Dakshina Kannada and Udupi districts early in the morning. PFI leaders were taken into custody from Mangaluru, Ullal, Talapady and other areas in DK district.

Besides, five PFI leaders were taken into custody by the Udupi district police in raids conducted in their houses. Sources said raids were conducted at Hoode, Gangolli, Byndoor and Adi Udupi. The police department has been monitoring the activities of the detained leaders for the past six months and they have been taken into custody to prevent any untoward incident, the sources added.

The Maharashtra ATS on Monday told a court in Mumbai that it wanted to probe the links of five of the 20 people arrested last week with organisations including Al Qaeda and the Islamic State and also investigate electronic evidence. Four PFI activists were also arrested from Kerala’s Kottayam district and one from Kollam in Kerala for allegedly engaging in violent activities during the state-wide hartal called by the organisation on September 23. The strike had followed the nationwide raids on their offices and arrests of their leaders.

Following the September 22 searches, the PFI said the raids are taking place at the homes of national, state and local leaders of the outfit and that the state committee office in Kerala is also being raided.

“We strongly protest the fascist regime’s moves to use agencies to silence dissenting voices,” it said in a statement. PTI