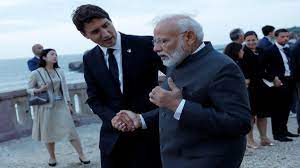 New Delhi: Irked by the Canadian government’s “lackadaisical approach” towards individuals and organisations engaged in promoting and carrying out anti-India activities and sectarian crimes, the Narendra Modi government Friday issued a lengthy travel advisory on Canada, considered to be a friendly country for India.

This comes within months of Prime Minister Modi meeting his Canadian counterpart Justin Trudeau on the margins of the G7 Summit in Germany in June.

While this is not the first time India has issued an advisory on Canada, Friday’s cautionary note made some strong signals to the Canadian government for their “lackadaisical approach” towards India’s repeated requests in taming the Khalistani elements that have given rise to gangsterism, likely promoted by the “invisible” ISI hand, top-level sources told ThePrint.

An advisory for Indian citizens in Canada was issued earlier this year in February when there was a massive protest by the truckers. But that was issued by the Indian High Commission in Canada.

This time the advisory has been issued by the Ministry of External Affairs to give a “loud and clear” message to the Trudeau government which continues to “rely heavily on these elements for vote bank politics,” said sources who wished to not be named.

In its advisory, the MEA said, “There has been a sharp increase in incidents of hate crimes, sectarian violence and anti-India activities in Canada. The Ministry of External Affairs and our High Commission/Consulates General in Canada have taken up these incidents with the Canadian authorities and requested them to investigate the said crimes and take appropriate action. The perpetrators of these crimes have not been brought to justice so far in Canada.”

While the government has not directly discouraged Indian students who are planning to go to Canada for higher studies or those citizens seeking permanent citizenship there, it did say, “In view of the increasing incidences of crimes as described above, Indian nationals and students from India in Canada and those proceeding to Canada for travel/education are advised to exercise due caution and remain vigilant.”

It also asked all Indian nationals and students in Canada to register with the High Commission of India in Ottawa or with the Consulates General of India in Toronto and Vancouver.

Earlier this week, the Modi government gave a stern message to Canada after hundreds and thousands of people from the Sikh community gathered in Brampton, Canada, on 19 September to participate in a so-called referendum that seeks to create a different country for them cut out of India.

The Sikhs gathered there had raised anti-India slogans while chanting “Khalistan Zindabad”, holding the purported Khalistan flag. This was held under the aegis of ‘Sikhs for Justice’ (SFJ) that was banned in India in 2019.

Arindam Bagchi, Spokesperson, Ministry of External Affairs, called it a “farcical exercise” and said that the matter has been taken up with the Canadian government.

“The government of Canada has reiterated that they respect the sovereignty and territorial integrity of India, and that they will not recognise the so-called referendum, which is taking place in Canada,” said Bagchi.

“However, we find it deeply objectionable that politically motivated exercises by extremist elements are allowed to take place in a friendly country. You’re all aware of the history of violence in this regard. And the government of India will continue to press the government of Canada on this matter,” he added.