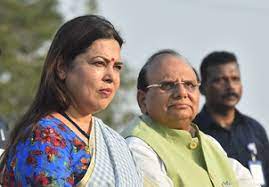 BJP spokesperson Sambit Patra said it was high time Kejriwal and his deputy Manish Sisodia answered questions raised by his party over the alleged corruption in the now-withdrawn excise policy brought by the AAP government in Delhi. Sisodia pocketed a huge amount of money, he alleged while talking to reporters.

The high court earlier restrained AAP leaders from levelling alleged defamatory allegations against Saxena and directed them to take down the alleged libelous posts, videos and tweets against him on social media.

Saxena had sought an injunction against AAP, its leaders Atishi Singh, Saurabh Bharadwaj, Durgesh Pathak and Sanjay Singh, and Jasmine Shah, vice chairperson of the Dialogue and Development Commission, to delete or take down the alleged false and libelous posts or tweets or videos circulated and issued on social media against him and his family.

Patra said Kejriwal has a history of levelling false allegations and referred to his apology to a number of leaders, including BJP's Arun Jaitley and Nitin Gadkari, against whom he had levelled various allegations.

"As far as the AAP is concerned, they shout the allegations but whisper the apology," he added.

The AAP leaders had levelled allegations against Saxena related to channelising demonetised currency in November 2016 while acting as chairman of the Khadi and Village Industries Commission (KVIC). He denied the charges and moved the court against the AAP leaders.

BJP IT Department in-charge Amit Malviya said, "Kejriwal’s shoot and scoot policy hits Delhi High Court's block, which has slammed AAP for running a campaign of calumny against Delhi LG, has passed an injunction order in his favour.

"Kejriwal's tryst with embarrassment is not new but this might be among one of this last." LG Saxena tweeted "Satyameva Jayate" (truth alone triumphs), soon after the High Court order.

Sources in the LG office said, "The order has vindicated the LG's stance and called out AAP’s mud-slinging campaign." PTI